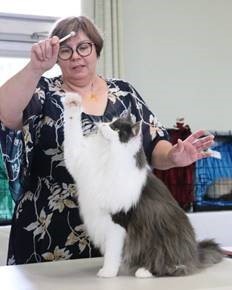 I have always had a cat in my life since I was toddler & they all have been my best friends. I became involved in the cat fancy since 1997 when I started showing desexed Spotted Mist cats (aka Australian Mist) as they were known then. I bred & showed Australian Mists under the Djindi prefix till 2008. In 2004 I became captivated by the beautiful soft curly coat of the Selkirk Rex & started breeding them in 2005 under the prefix Purrcurls. During my time as a breeder I have also bred Exotics, Persians & British Shorthair under the Djindi prefix and now I have started breeding the elegant Russian. During 2015 – 2017 I was awarded GCCFV Inc Group 3 Breeder of the Year.

Since 1997 I have been an active member of any organisation I have had held membership with. I have held positions of show manager for affiliate clubs, association's and the Royal RASV show. In 1999 I qualified as a judge's steward; between 2008–2014 I was the assistant secretary of the GCCFV; & the Group3 Registrar for both GCCFV Inc & CV Inc.