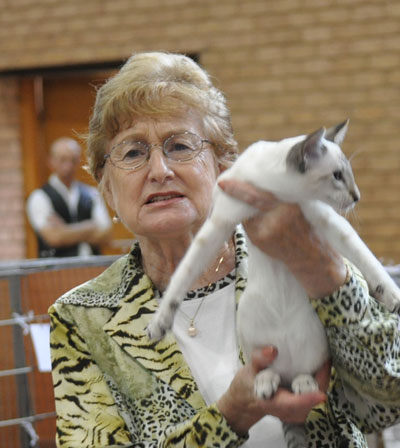 I am an All Breeds Judge with NSW CFA, on the judging panel for CCCA and I am an Accredited All Breeds Tutor Judge. I have helped with the training of many NSW and interstate Judges. I have judged throughout Australia and New Zealand where I have made many friends throughout the Cat Fancy. I enjoy my judging assignments and consider it a great privilege to be invited to judge and handle so many beautiful felines and such a variety of breeds in Australia & overseas. The first pedigreed cats I owned were two neutered pet Chinchillas which I learnt to groom & care for on a trial by error basis. In 1975 I purchased two Seal Point male kittens which the breeder urged me to show. After winning two Best in Show awards with Nikolas I neutered Czar, purchased a SP female and started breeding my Sucheng Siamese. Since then I have bred many Seal Point & Blue Point kittens and have imported cats carrying famous UK & NZ bloodlines to improve my Siamese breeding stock. I have always been intrigued with Abyssinian cats. This is a cat which is difficult to judge and a challenge to breed so I took up the challenge and imported a Tawny Abyssinian female from NZ. Since then I have bred and shown Tawny and Cinnamon Abyssinians. I was President of the Siamese Cat Society for many years in 1996 I resigned from that position to become President of the Siamese & Shorthair Cat Club. This club features at its annual Championship Show, special rings for nominated breeds, plus Top 10 best in show awards in the VIP Ring as the highlight of the show. The other specialist Breed Clubs I support are the Abyssinian Cat Club, the Burmese Cat Club, the Oriental Cat Club and the Bengal Club. I have been involved with the Australian Mist Breeders Association, as a member and have worked closely with Dr Truda Straede during the formation of this popular breed and am now their Patron. Creating a new breed is a challenge and it has been a great pleasure to have been involved with the Burmilla Breeders Association helping with assessments of their cats and kittens during their quest for full breed recognition. I have been a member and registered breeder since 1975. I was elected to the Consultative Committee RAS Cat Control in 1984 and remain a member of the current Management Committee. During those 22 years of service I have been involved with fundraising & was responsible for organizing Cat of the Year Luncheons and Champion of Champion dinners for many years. I have also been involved in training classes for Shorthair Judges, Domestic Judges and Stewards. I have been a delegate for CCCA meetings and have worked on the Breed Standards Committee and the Judges Training Committee. My goal is to see a United Australian Cat Fancy where all the controls work together to promote the breeding and showing of our pedigreed cats.